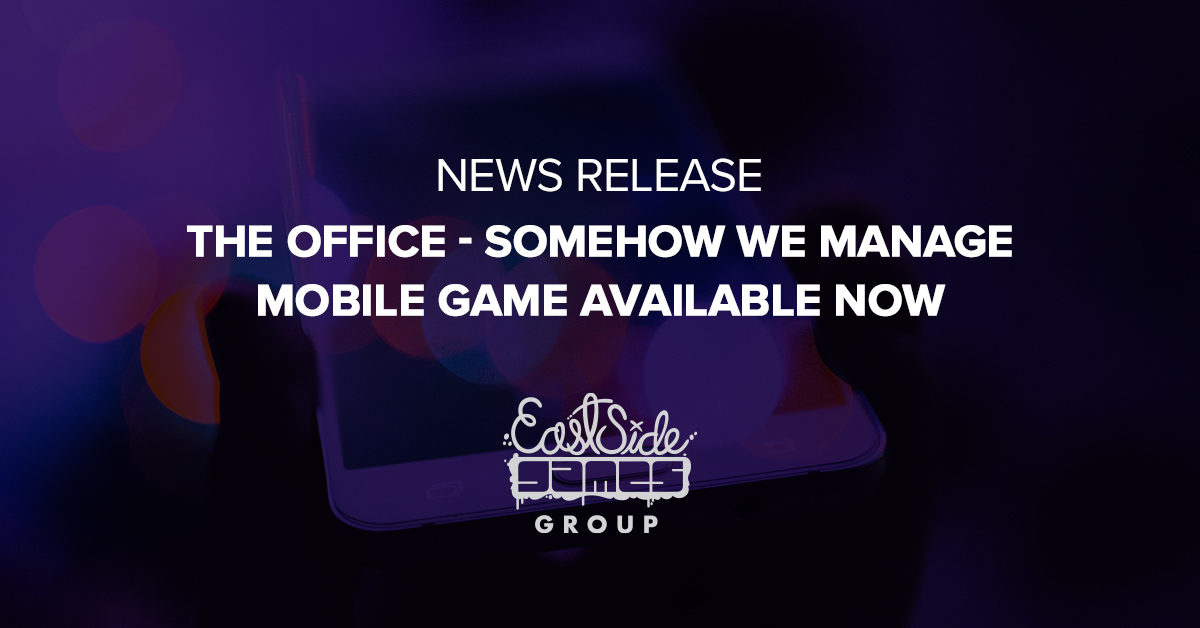 Vancouver, BC, January 27, 2022 – East Side Games Group (TSX: EAGR) (OTC: EAGRF) (“ESGG” or the “Company“), Canada’s leading free-to-play mobile game group, in collaboration with Universal Games and Digital Platforms, announced today the worldwide launch of The Office: Somehow We Manage on iOS and Android. The free-to-play idle game is inspired by NBC’s critically acclaimed, Emmy® Award-winning U.S. version of The Office, which is now streaming exclusively on Peacock.

“The Office: Somehow We Manage offers players the chance to immerse themselves in iconic moments from the series and connect with their favorite characters like never before,” said Darcy Taylor, Chief Executive Officer of ESGG. “Fans of The Office will absolutely feel the nostalgia through this new game.”

“The Office: Somehow We Manage reimagines the cast as vibrant, animated characters for the first time, bringing a fresh new experience to The Office fans everywhere,” said Jim Molinets, SVP of Production, Universal Games and Digital Platforms. “The game will transport players into well-known and hilarious episodes that have resonated with so many over the years and let them ‘clock in’ even more time with their favorite Dundler Mifflin employees.”

The Office: Somehow We Manage will allow fans to relive memorable moments from the show like they’ve never seen them before – animated, all while tapping their way to record profits to save the Scranton Branch from downsizing. Featuring accessible gameplay for all types of players, this narrative idle tapper will give players the chance to unlock and upgrade iconic characters and their desks all the while participating in monthly special events for additional in-game rewards.

Tap, upgrade, and build desks for favorite characters from the hit NBC comedy The Office, including Prison Mike, Farmer Dwight, Pretzel Day Stanley, and of course, Three Hole Punch Jim, all appearing in animated form for the first time.

Click through memorable episodes in this free-to-play game, like “The Dundies” and “Dinner Party.” Take a seat in Michael’s office, get in line for Pretzel Day, or spend the weekend at Schrute Farms. Oh, and watch out for Kevin’s famous chili! Additional episodes from all nine seasons of the show will be added to the game on a regular basis.

In-game events will introduce new versions of characters and more memorable moments, along with weekly and monthly special events inspired by elements from the show.

Manage Dunder Mifflin Scranton with the help of the whole branch! Get new leads and tap away as the in-game rewards start rolling in. Just make sure Michael doesn’t spend the surplus on a new plasma TV!

Visual assets for the game, including key art and logos, can be found in the online press kit.

ABOUT NBC’S THE OFFICE

Produced by Universal Television in association with Deedle-Dee Productions and Reveille Productions, The Office is a groundbreaking mockumentary television series that follows the daily lives of the employees of the Scranton branch of Dunder Mifflin, a fictional paper company. All nine seasons of the Emmy® Award-winning series are available exclusively on Peacock.

ABOUT UNIVERSAL GAMES AND DIGITAL PLATFORMS

Universal’s Games and Digital Platforms group leverages the vast portfolio of IP and characters from NBCUniversal. The Games and Digital Platforms group is a business unit of Universal Brand Development, which is chartered with globally expanding the company’s intellectual properties, franchises, characters and stories through innovative physical and digital products, content, and consumer experiences. The company’s extensive portfolio includes properties created by Universal Pictures, Illumination, DreamWorks Animation and NBCUniversal Television and Streaming. Universal Brand Development is part of NBCUniversal, a subsidiary of Comcast Corporation. www.universalbranddevelopment.com.