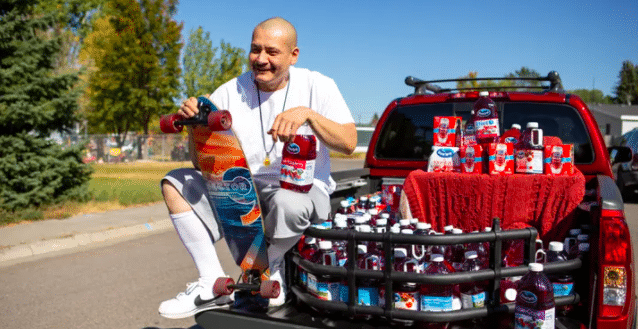 It’s always a bit of a surprise which videos end up going viral. There’s rarely a discernible reason that some things catch on and others don’t. Often, the videos that do capture global attention are much simpler than the ones that seem carefully calibrated to garner reactions.
Nathan Apodaca is a good example. The 37-year-old Idaho dad has amassed more than nine million likes for a delightful TikTok set to Fleetwood Mac’s “Dreams.” There are no obvious comedic beats or dramatic scenery or choreographed dance moves — just a guy contentedly skateboarding down the street, drinking cranberry juice directly from the bottle, and briefly lipsynching to the classic 1977 tune.

On Thursday, a new project of his was announced: he’ll appear as a “guest card” in Cheech and Chong Bud Farm, a mobile game set in the 1970s where the comedy duo tries to smoke weed and outsmart the law. On Friday, users can attend an in-game Battle of the Bands, where Apodaca will be seen with his skateboard and cranberry juice.

“Cheech and I love the simple, chill feeling in Nathan’s TikTok video,” Tommy Chong said in a press release. “It’s really what we need right now and we are excited to have him in our game.”

The company behind the game, LEAF Mobile, will also donate to two charities of Apodaca’s choice, including a Canadian one: he opted for the B.C Humane Society and the Idaho Humane Society.