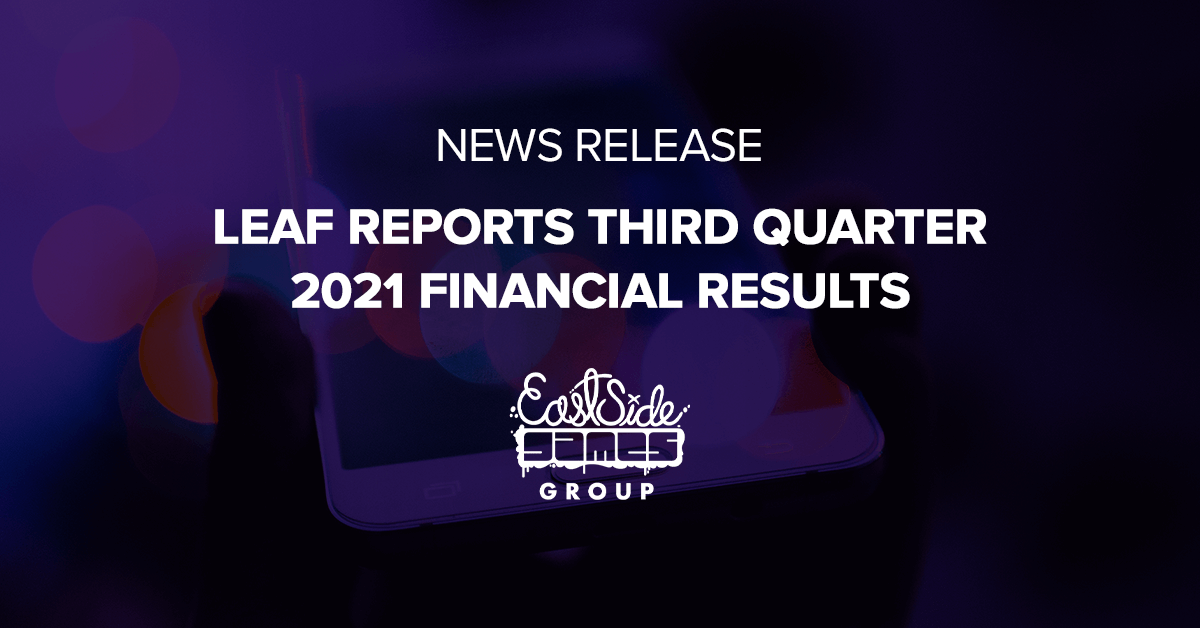 “We saw steady results for our third quarter, which is historically our slowest quarter and the slowest for the mobile game industry as a whole. This quarter we also continued to see the global reopening amplify traditional seasonality and Apple’s ATT introduction still working its way through the mobile marketing ecosystem. In response to this transitory period, we maintained our reduced marketing investments in our games to more measured levels until the final month of Q3, as we started to increase user acquisition investments when we started to see positive signs of ecosystem adaption working their way through the industry, while continuing to focus resources on our ramping pipeline of Q4 game launches,” said Darcy Taylor, CEO of LEAF.

“October 25th marked the first of our Q4 launches, with the worldwide launch of RuPaul’s Drag Race Superstar. The game has shown promising early results, surpassing 1 million downloads since launch and reaching the #1 role playing game ranking in 44 countries on iOS, and ranking in the top 10 in 67 countries. The game has averaged 150,000 daily active users since launch, the highest in our portfolio of games, and has reached the top 100 grossing games in 40 countries on iOS. One week after launching RuPaul’s Drag Race Superstar, we launched B-Real Monster Buds with B-Real of Cypress Hill which will be followed in December by a game based on the critically-acclaimed, Emmy® award-winning comedy, The Office, titled The Office: Somehow We Manage and 4 additional titles currently in soft launch,” continued Mr. Taylor.

⦁ Revenue was $19.0 million, a 3.8% increase vs Q3 2020 revenue of $18.3 million.
⦁ YTD nine months revenue was $64.6 million, an increase of 32.1% vs same period 2020 revenue of $48.9 million.
⦁ YTD nine months Adjusted EBITDA was $6.3 million, an increase of 16.5% vs same period 2020 Adjusted EBITDA of $5.4 million.
⦁ Net and comprehensive loss of -$1.4 million, or ($0.02) on a per common share basis.
⦁ Announced the collaboration with Universal Games and Digital Platforms to create The Office: Somehow We Manage, mobile game based on the critically-acclaimed Emmy® award winning NBC comedy, The Office, scheduled to launch this December 2021.
“We continue to see the benefits of our investments in key areas that drive long-term revenue and margin growth. We’re excited for the fourth quarter of this year as we will see multiple super marquee IP game launches,” continued Mr. Taylor. “We will continue to execute on our 3-pillar strategy of combining accretive acquisitions, organic game growth and distributed growth through our proprietary Game Kit platform licensing.”

⦁ RuPaul’s Drag Race Superstar mobile game launched worldwide on October 25th and has surpassed 1 million downloads and averaged over 150,000 daily active users since launch, achieving the highest daily active users for any of LEAF’s active games. As of November 11th, the game was the #1 ranking role playing or simulation game in the iOS App Store in 44 countries and ranked in the top 10 in 67 countries. The game has also reached the top 100 grossing games in 40 countries on iOS.
⦁ B-Real Monster Buds in partnership with B-Real of Cypress Hill worldwide launched on November 1st. B-Real has more than 1.3 million followers on Instagram and over 700,000 subscribers to his BREALTV YouTube channel.

“We expect that our “Super Marquee” IP lead game titles in Q4 will deliver a significant step change in our game growth potential. We see this move from North American-centric IP, that has fueled our revenue delivery to date, to global IP with the associated global fandoms of The Office and RuPaul’s Drag Race attracting more players, and opening up further opportunities for future growth,” said Darcy Taylor.

The Company will hold a conference call to discuss its performance with the investment community at 2:00 p.m. PT today. Related earnings release materials can be found on LEAF’s website at https://eastsidegamesgroup.com/investors/financial-information/.