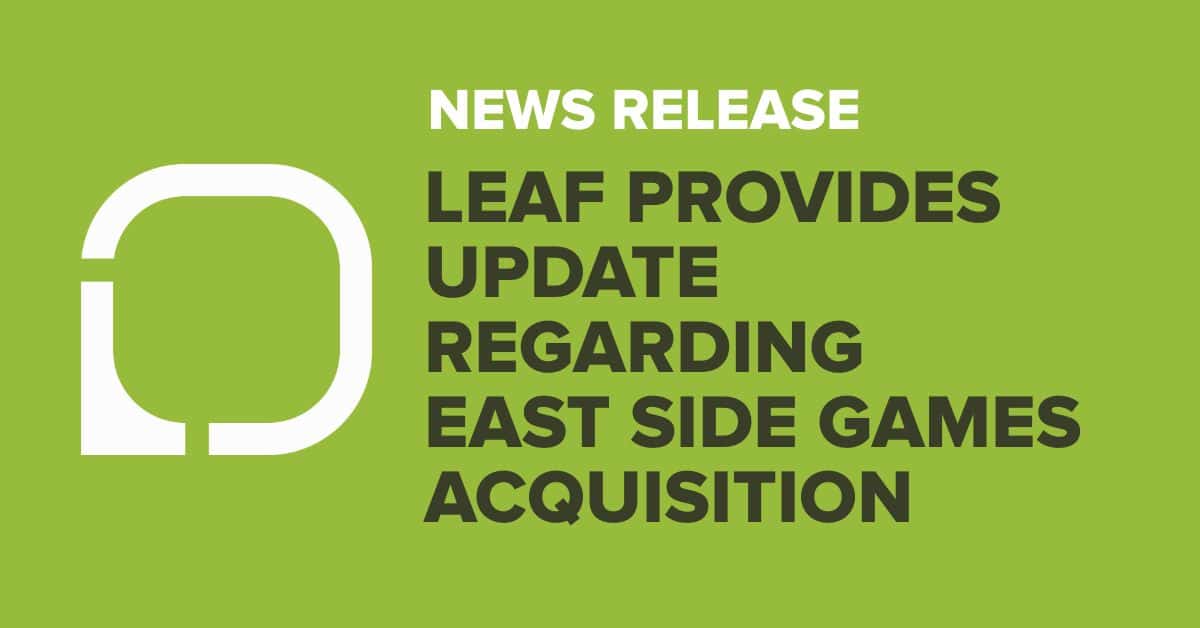 Vancouver, BC, Canada, October 26, 2020 – LEAF Mobile Inc. (TSXV: LEAF)(“LEAF” or the “Company“) provides the following update regarding its proposed acquisition of East Side Games (the “Acquisition“), previously announced on October 7, 2020.

Resulting Issuer Board and Executives

Upon completion of the Acquisition, it is intended that Darcy Taylor will remain as CEO, Mark Leung will remain as CFO, and Brian Wideen will remain as VP Finance of LEAF.  As previously announced, Jason Bailey, founder of East Side Games, will be appointed as Chief Revenue Officer of LEAF.

Further to our previous announcement, it is now intended that the directors of the Resulting Issuer will be as follows:

Jason is a founder of East Side Games, Canada’s leading independent gaming studio. Jason is considered one of Canada’s most experienced gaming entrepreneurs. Prior to East Side Games, Jason was a founder of Super Rewards, which he sold in 2009.  Super Rewards was a social game monetization platform which helped pioneer the free to play game model that is ubiquitous today.  Over the last 20 years he has been mentor to and investor in a variety of Canadian startups and technology companies.

Birgit Troy is a Portfolio CFO at Volaris Group, the largest operating group under Constellation Software (CSU), one of Canada’s leading technology companies.  Over the last 5 years she has led M&A efforts to acquire and integrate 15 operating companies into Constellation Software.   Prior to Volaris, Birgit was the CFO of Incognito Software Systems (acquired by Volaris) and VP Finance of TSO Logic (acquired by Amazon) and Strangeloop Networks (acquired by Radware).

Derek Lew has advised, started and invested in technology companies for over 20 years. An active member of the technology community in Vancouver, he is President and CEO of venture capital fund manager GrowthWorks Capital Ltd and Chairman of BlueStar Capital on the AIM (UK’s largest public eSports investor) and past-Chair of Innovate BC (formerly the British Columbia Innovation Council), the crown Agency of the Province of British Columbia mandated to accelerate technology commercialisation. Derek is a Partner with Initio Group, a Vancouver, BC based early-stage angel investment firm.

Jonathan Bixby is a seasoned technology entrepreneur in both the private and public sector.  He is the co-founder of a number of significant companies including, Koho, Canada’s largest challenger bank, Guild Esports PLC (a listed Esports company on the LSE with David Beckham) and Blue Mesa Health (acquired by the Virgin Pulse).  He is a board member of CTO.AI and a former Chairman of the Board of Argo Blockchain PLC (LSE Listed) and Darkvision Technologies (acquired by Koch Industries).    He is a strategic advisor to Fastly (NASDAQ).

Darcy Taylor, CEO said: “We are delighted to announce the proposed directors moving forward for the Company. We believe that this proposed board of leading Canadian entrepreneurs, investors and acquirers positions us very well moving forward, as we aim to create the largest mobile game company in Canada.”

Investors are cautioned that, except as disclosed in the management information circular to be prepared in connection with the Acquisition, any information released or received with respect to the Acquisition may not be accurate or complete and should not be relied upon. Trading in the securities of LEAF should be considered highly speculative.

The TSXV has in no way passed upon the merits of the proposed Acquisition and has neither approved nor disapproved of the contents of this news release.

Additional information in connection with the Acquisition and the financing will be provided in subsequent news releases.

LEAF Mobile Inc. (TSX.V: LEAF) is a leading creator of counterculture mobile games. Headquartered in Vancouver, with a premier development studio, LDRLY, based in Nanaimo, British Columbia, the company is highly skilled in intellectual property, mobile game development, marketing and publishing. LEAF’s culture is anchored in creativity, data insights and execution, delivering highly engaging games that produce enduring player enjoyment. With over a decade of experience in game development and marketing, LEAF has consistently delivered high-grossing original and licensed IP titles that include Cheech & Chong Bud Farm, Bud Farm Idle Tycoon, Bud Farm Grass Roots and Bud Farm 420. Our game titles are available worldwide on the App Store and Google Play. LEAF leverages successes in platform, IP, marketing, development and data analysis to maximize value for our global network of constituents, from players to talent to shareholders and beyond.

ON BEHALF OF THE BOARD