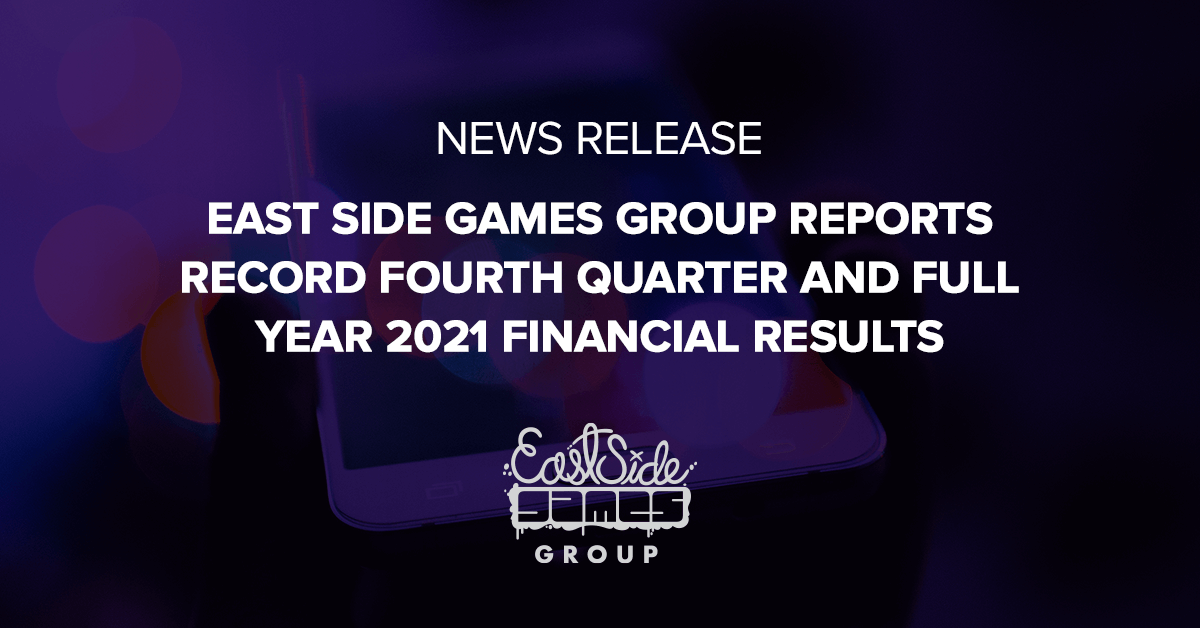 All figures are as reported under IFRS

“This was a monumental year for ESGG and we capped it off with significant growth in Q4, achieving record quarterly revenue, annual revenue and record user numbers, in addition to launching our first ‘Super Marquee’ title, RuPaul’s Drag Race Superstar. The marketing landscape continued to improve in the fourth quarter, we have adapted well to Apple’s IDFA changes and have been successful in our marketing campaigns with increased disciplined investing in user acquisition towards the end of the year linked to new launches and sustained returns. This contributed to an extremely successful launch of RuPaul’s Drag Race Superstar which, as we mentioned last quarter, surpassed the 1 million download mark only weeks after launch. Our core portfolio of games was a strong contributor to our performance this quarter. We had no new game launches until late October and still realized a strong recovery from the seasonally slow third quarter,” said Darcy Taylor, CEO of East side Games Group.

“With a record setting FY2021 in the rear view, we have continued to execute on our growth strategy. On January 27 of this year, we launched the second of our ‘Super Marquee’ titles, The Office: Somehow We Manage, in collaboration with Universal Games and Digital Partnerships. This title has already ranked in the Top 10 Games in Canada and the US, Top 10 Casual Games in 6 countries, and was also featured as Game of the Day, on the Apple App Store. February 15th marked another milestone for us as we announced the achievement of $100 million revenue for the 12-month period ended February 5, 2022. We expect to build on this $100 million milestone through Q1 2022 as we recognise a full quarter of revenue from RuPaul’s Drag Race Superstar and capture the first partial quarter of The Office: Somehow We Manage as it begins to ramp up,” continued Mr. Taylor.

“Record quarterly revenue capped off a record year for us. The breadth of our game portfolio allowed us to adapt to marketing landscape changes in the previous 2 quarters and return to strong growth in Q4. Adjusted EBITDA was impacted by increased investment in user acquisition and development of new titles,” continued Mr. Taylor.

“We’ve carried our momentum into 2022, executing on our growth pillars of organic game growth, accretive acquisitions and distributed growth through our proprietary Game Kit platform licensing. We’ve added more ‘Super Marquee’ IP in the form of the Star Trek and Doctor Who franchises, acquired Funko Pop! Blitz, which fits perfectly into our portfolio of top tier casual games, in addition to expanding our Game Kit partnership with Mighty Kingdom,” said Darcy Taylor.

The Company will hold a conference call to discuss its performance with the investment community at 2:00 p.m. PT today. Related earnings release materials can be found on East Side Games Group website at https://eastsidegamesgroup.com/investors/financial-information/.