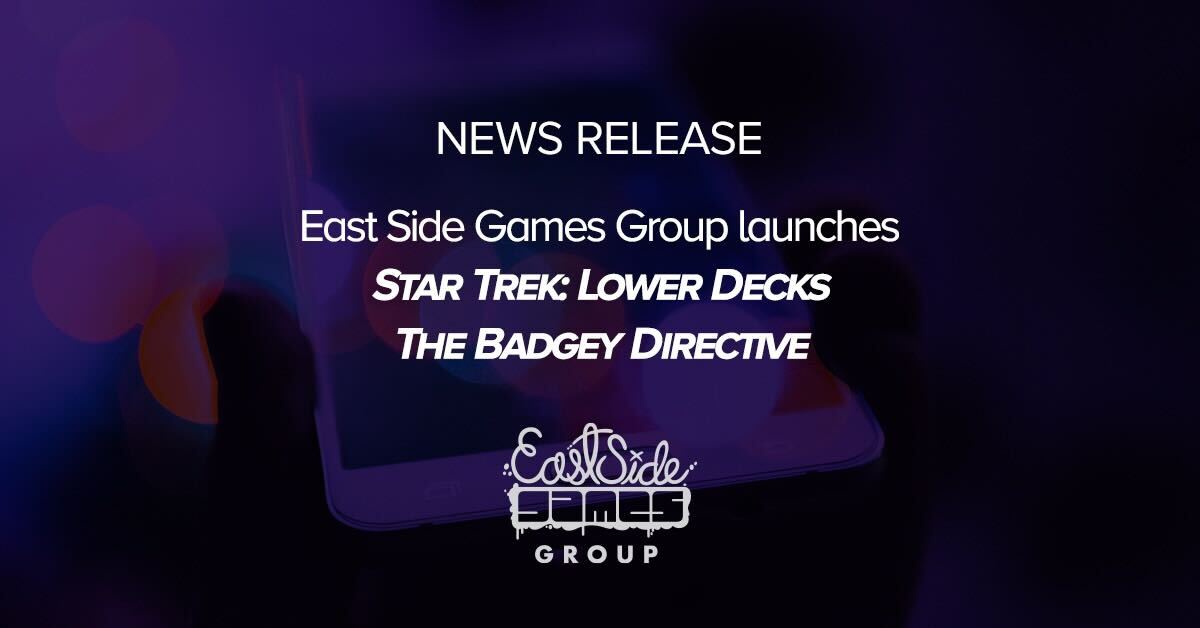 In addition to the storylines and characters from Star Trek: Lower Decks, the mobile game includes characters and stories from across the franchise, reimagining them for fans through the lens of the show. The game is part of a multi-year partnership with Paramount Consumer Products, utilizing ESGG’s proven Game Kit-Idle technology. It has been co-developed by East Side Games (“ESG”) and Mighty Kingdom Limited (“MK”) and published by ESG.

The free-to-play mobile game features the style and humour that has captivated the show’s audience, transporting players into the Star Trek Universe.

“There’s a long history of taking Star Trek shows and making Star Trek things, and this game is more than just a “thing” – it’s a neat thing! I love that it’s a game with narratives, so you can hop on your phone and get a little slice of Lower Decks on the go,” says Mike McMahan, creator and showrunner of Star Trek: Lower Decks.

Not only has the game been an exciting addition to the ESGG catalogue, but it’s also been a hit with players as well. Earlier this year, the title was soft launched in limited markets including Canada, Australia, New Zealand, Philippines, Sweden, Denmark, Norway and Finland.

The game is now available in all major markets across the globe. Players can download and play now.

“Being able to bring such a beloved franchise to the mobile game space is an honour for all of us at ESGG. We are fans first so as passionate members of the Star Trek following, this is particularly exciting for us,” said Jason Bailey, Chief Executive Officer of ESGG. “Star Trek: Lower Decks – The Badgey Directive is another top-tier IP franchise adding to what has already been a record-breaking year for ESGG.”

Visual assets for the game, including key art and logos, can be found in the online press kit. The trailer for Star Trek: Lower Decks – The Badgey Directive is available here.

Additional information about the Company continues to be available under its name, East Side Games Group Inc., at  www.sedar.com.

STAR TREK: LOWER DECKS streams exclusively on Paramount+ in the U.S. and Latin America and is distributed concurrently by ViacomCBS Global Distribution Group on Amazon Prime Video in Australia, New Zealand, Europe, Japan, India and more and in Canada, airs on Bell Media’s CTV Sci-Fi Channel and streams on Crave.

Mighty Kingdom delights more than 7 million players every month and designs game experiences with the world’s most recognised brands such as LEGO, Disney, Mattel, Funcom, Moose Toys, Spinmaster and more, as well as developing its own original games. Our portfolio of games is crafted from our Adelaide headquarters, with a diverse team of more than 140 developers from across Australia. Led by a desire to engage and delight players, we make exceptional experiences that connect our diverse talent with millions of people around the world. We make games with heart. We Love Fun. We want to share it with the world. We want you to be part of it.