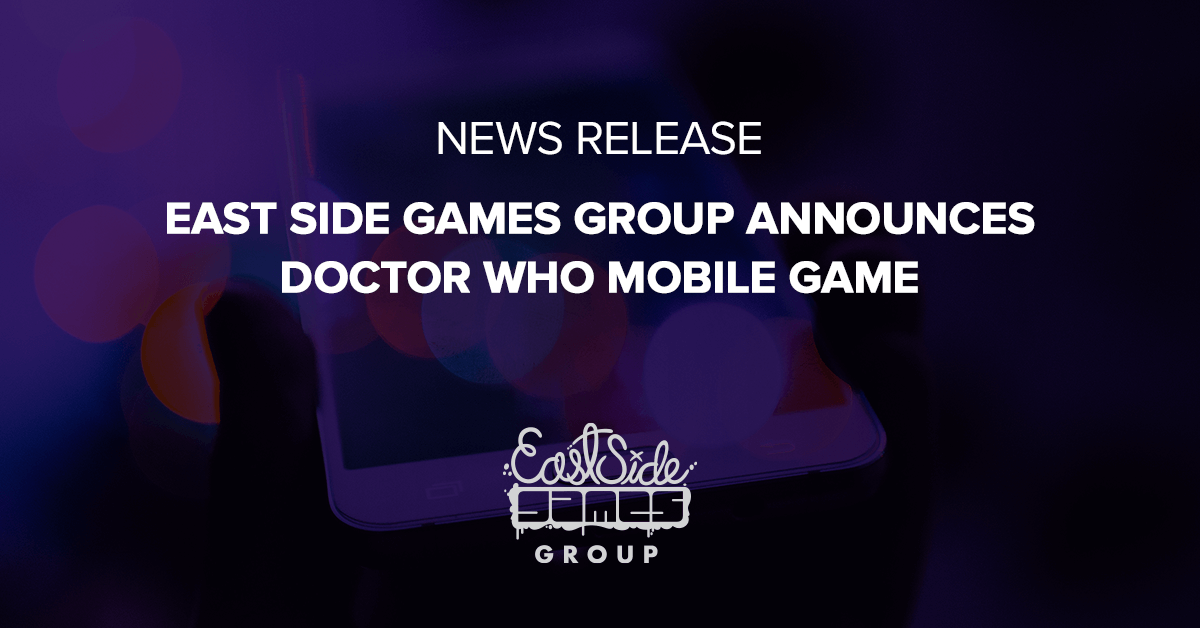 First idle-genre mobile game inspired by the action-adventure classic. Revisit iconic moments from the series and explore original tales set in the Who-niverse.

Vancouver, BC, January 20, 2022 – East Side Games Group (TSX: EAGR) (OTC: EAGRF) (“ESGG” or the “Company“), Canada’s leading free-to-play mobile game group, has entered into a multi-year partnership with BBC Studios, for the worldwide release of a mobile title based on the Doctor Who franchise. The game will be available in 2022 on both iOS and Android.

The game will be a free-to-play narrative-driven title where players will be able to explore new and classic stories and bring together companions and characters from across the Who-niverse. The game will be developed leveraging the company’s proven Game Kit technology and will be published by East Side Games (“ESG”).

“Doctor Who has been capturing the imaginations of people for almost 60 years and we couldn’t be more thrilled and honored to have the opportunity to bring this legendary franchise to mobile,” said Darcy Taylor, Chief Executive Officer of ESGG. “This agreement with BBC Studios allows us to bring a truly iconic, globally recognized franchise to an enduring fan base of new and diehard fans and further strengthens our ‘Super Marquee’ game publishing portfolio.”

“We’re delighted to be working with East Side Games Group to bring a new narrative driven Doctor Who game to mobile,” said Kevin Jorge, Senior Producer at BBC Studios. “This new partnership will allow gamers and fans the opportunity to meet and collect a huge cast iconic characters from across the Who-niverse, relive fan favourite adventures and defeat iconic enemies as they try to save the Doctor in an exciting new story.”

East Side Games Group (formerly operating under the name “LEAF Mobile Inc.”) is a leading free-to-play mobile game group, creating engaging games that produce enduring player loyalty. Our studio groups entrepreneurial culture is anchored in creativity, execution, and growth through licensing of our proprietary Game Kit software platform that enables professional game developers to greatly increase the efficiency and effectiveness of game creation in addition to organic growth through a diverse portfolio of original and licensed IP mobile games that include: Archer: Danger Phone, Bud Farm Idle Tycoon, Cheech & Chong Bud Farm, The Goldbergs: Back to the 80s, It’s Always Sunny: The Gang Goes Mobile and Trailer Park Boys Grea$y Money, RuPaul’s Drag Race Superstar and the soon to be released, The Office: Somehow We Manage.

BBC Studios, a global content company with bold British creativity at its heart, is a commercial subsidiary of the BBC. Able to take an idea seamlessly from thought to screen and beyond, its activities span content financing, development, production, sales, branded services, and ancillaries across both its own productions and programs and formats made by high-quality UK independents. Award-winning British programs made by the business are internationally recognized across a broad range of genres and specializations, with brands like Dancing with the Stars/Strictly Come Dancing, Top Gear, and Doctor Who. BBC.com, BBC Studios’ global digital news platform, provides up-to-the-minute international news, in-depth analysis and features to more than 139 million unique browsers each month. BBC Studios has offices in 20 markets globally, including ten production bases in the UK and production bases or partnerships in a further nine countries around the world. The company, which ordinarily makes around 2,000 hours of content a year for both the BBC and third parties including Apple, Netflix, and Migu, is a champion for British creativity around the world. It is also a committed partner for the UK’s independent sector through a mix of equity partnerships, content investment, and international distribution for program titles.

In the Americas, BBC Studios operates a diverse portfolio of businesses focused on bringing the best of British content to fans across the region. This includes joint ventures with AMC Networks for flagship channel BBC AMERICA (U.S.) and with ITV for SVoD service BritBox (U.S./Canada), as well as a strategic partnership in Canada with Blue Ant Media for channels BBC Earth and BBC First. In February 2021, BBC SELECT, an ad-free, digital streaming channel offering all-new documentaries across culture, politics, and ideas, launched in the U.S. and Canada on Amazon Prime Video Channels and the Apple TV app. BBC Studios also runs a robust linear and digital content sales and co-productions operation, as well as a franchise management business. In addition, BBC Studios operates one of its major scripted and unscripted production unit in Los Angeles, responsible the Emmy®-winning Dancing with the Stars, the multi-award-winning Life Below Zero, and the popular reboot of the classic quiz show Weakest Link, among others.